In the beginning, there was a golden bean

In the beginning, there was a golden bean

“Ha! You’re the guy who does that blog!”

I was like: “Eh?” I had only been in this country for a mere 30 minutes and I was already getting recognized? Very strange.
“Ehm, yes I suppose I am,” I answered, while trying to place the face of the happy chap who was extending his hand for a handshake. Next to him, the barista also smiled broadly and then my recognizer proudly said to him: “See? I knew he’d come!”

This was all a bit cray cray. “You have to explain this to me. I don’t think we’ve met?” “I was the one who told you to come here on couchsurfing. Remember?” “Oh shit! Hi!!!!!” Suddenly the penny dropped, although I was still a bit like whoaaa.

What a hilarious start to my little weekend trip to Luxembourg. After getting off the plane I boarded a bus and immediately went to look for one of the places that someone had told me about in a topic I posted on couchsurfing. Golden Bean was one of two places that Claude, the happy chap, had suggested and as destiny has it, he was there to welcome me to his home town and his favourite caffe. View of the bar

After ordering an aeropress I sat down outside in the sunshine and was then quickly joined by Claude, who easily could have been my friend Matt’s twin, and one of the owners, Federico. We descended into a deep discussion about how Luxembourg, despite all the money, had, until very recently, no specialty coffee scene to speak of. When Federico, his brother Felipe and a third partner who does all the roasting in Echternach decided to open Golden Bean, a glimmer of hope suddenly appeared on the horizon.

Federico and Felipe who originally hail from Colombia but grew up in Germany, surprisingly decided to settle in Luxembourg, of all places. Federico told me his family has a long history in coffee and that his grandfather once was one of Colombia’s most important coffee traders. At that point I started to wonder whether this meant that instead of blood, him and his brother had liquid gold flowing through their veins. I refrained from grabbing a knife and stabbing Federico in the arm just to see if it was true though.

Claude formally attested that since Golden Bean opened its doors earlier this year, he only comes here to get his coffee. “I used to go to this burger joint down the road where they definitely make the best burgers in town but honestly, their coffee is really unreliable. I guess if you only make a coffee every couple of hours you probably don’t spend too much time thinking about whether it’s any good,” Claude said with a severe expression.

After both men shuffled back inside to attend to their individual businesses I sat there pondering whether Golden Bean’s location, smack bang in the middle of the busy town center, was really a good place to start a small specialty coffee revolution. Normally, places of this sort are in the hipster districts and require you to go out of your way to find them. I continued pondering while philosophically starting into my coffee cup as if it was going to reveal the right answer. In the end I decided that it was probably not a bad location at all. Luxembourg is a pocket sized city with lots of ups and downs, as I had to discover every time I descended back into the valley where my hostel was located. Made me realize that muscle doesn’t = good condition. What impressed me the most was the sheer variety of coffee brewing options that Federico and co had on offer. The most exotic of all was an Ally600 cold drip coffee device that some lady had brought back from South Korea recently. “I only got this really recently so don’t expect any magic to come out of there, haha,” Federico said after swinging over from behind the bar. “The coffee is supposed to come out super clean and bring out all the delicious flavours but because I have no idea what I’m doing it could be terrible!”

The next morning I huffed and puffed back up the old bridge towards the old town and  meandered my way through the packed center towards this specialty coffee place that was attracting me like a fly. The sun was shining, the skies were blue and everyone seemed to be in a good mood. Perfect!

I popped my head into the shop and was immediately greeted by a cheerful Federico who exclaimed: “Alex! Come, have a seat! Let’s chat!” He made me a Flat White with one of his special house blends that consists of 80% Arabica and 20% Robusta and grabbed a seat opposite me. “I’ve always wanted to do something with coffee and when my brother got married to a Luxembourg girl (aha!) and settled here I just followed. I had previously been training with Florian Steiner in Heidelberg where I learned a whole bunch of amazing things and then when I came here and saw this spot I just said: Fuck it. Let’s do it!” Plenty of coffee to choose from

The result is a lovely and bright caffe that really is all about great coffee. The slow coffee section offers all the classics including aeropress, Syphon and drip and his beans hail from Peru, Ethiopia and Mexico, amongst other origins.. You can try any coffee you like any way you like.

On Sunday afternoon I popped in one last time to enjoy one last cup of great coffee. I half expected to bump into Claude again too, who I had randomly seen at 2 completely separate spots the day before. Luxembourg really is a tiny little place but pleasant none the less. Instead I got to meet Federico’s brother Felipe who was trying to convince me to have one of their ciabatta sandwiches. Even though I hardly knew the brothers I felt like I was saying goodbye to old mates when I gulped down the last drops of my Yirgacheffe and shook hands with them. Guys like these are the reason why I love the specialty coffee world and what drives me to help promote their businesses. “Hasta luego,” I said as I grabbed my trolley to brave the rain outside and head back to sunny Amsterdam. 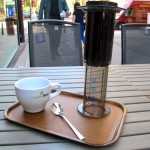 A lovely aeropress to get the day started 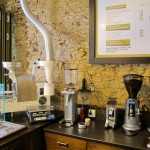 A tiny bit of roasting is also done in house 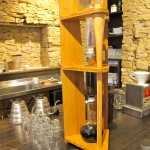 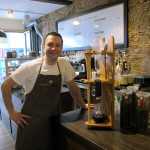 Thank you. I just want to know if the bar serves Indonesian coffee and would you let me know the source (which area?). I will call Golden bean for further conversation. Regards

Hi Catur. If you want to contact Golden Bean you need to speak to them directly. This is only a review of their coffee bar.

I am wondering if you have Indonesian coffee.

It was great to read it as we are the manufacturer for colddrip tools. :-) Thanks.

Hi Emma, glad I could help. Say hi to the guys from me!

Thanks for this, I am visiting Luxumbourg city this weekend and was trying to find the best coffee in town. I'll be sure to check it out.