Whenever you win a title, especially the World Barista Championships, you can expect to see your coffee bar turn into a sort of site for coffee pilgrimage, attracting coffee lovers from your immediate surroundings, your home country and the whole world. That is pretty much exactly what to Simple Kaffa, coffee bar and roastery owned by last year’s champion Berg Wu and his wife Chee. View from the patio

Located in the basement lobby of design Hotel V and admittedly very hard to find if you don’t know where to look, Simple Kaffa might strike you as a bit of an odd place. The coffee bar is relatively nondescript, with slightly tacky furniture – not Wu’s fault as I was about to learn – and surrounded by expensive fashion boutiques.

I took a seat at a vacant table and suddenly spotted Wu standing to the side of the bar and in a spur of the moment decided that it was either now or never. After politely introducing myself and explaining the purpose of my visit he ushered me back to my seat and moments later joined me with his wife Chee and a gorgeous cup of his slow dried Ethiopia, Zeti Pu. I could hardly believe my luck. There I was chatting to an incredibly humble and softly spoken World Barista Champion as if catching up with an old friend. After asking him how he got into coffee, Wu began by saying that he’s always loved making and transforming things. “It’s like magic, right? You take one thing and turn it into something else. For example: beautiful coffee beans that turn into delicious coffee. I’ve always been obsessed with that, so that’s how I got into it really,” he explained. The coveted trophy only few have claimed

Next to his previous job in a patent law firm, Wu and Chee ran a weekend coffee cart that soon had a loyal following and before they knew it, the people at Hotel V came to them with a surprising proposal. Someone had wanted to open a café in its lobby but two weeks before the official inauguration, the previous tennant changed his mind and dropped out. Wu and Chee had the unexpected opportunity to open a permanent location with very little investment and they jumped at it. Wu said with a shrug: “All of the furniture was already purchased so we just kept it.” 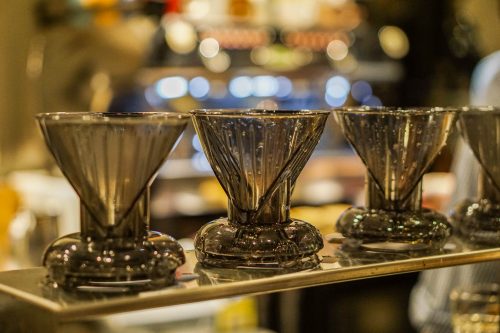 Filter coffees are prepared with the Clever dripper

His recent victory at the World Barista Championships suddenly turned the world’s attention towards Taiwan, people from all over the globe began to visit its capital and, for the first time ever probably, registered that this place actually had a pretty awesome coffee scene that no one was talking about.

But unlike his predecessors, Wu decided to focus on his business and his young family rather spending his time traveling the world. “He still does all of the coffee deliveries himself,” Chee whispered while Wu was speaking to a waitress. I did notice that some of the guests were pointing at him and giggling into their phones, probably taking secret Snapchats of the back of his head. Occasionally, I caught them in the act and gave them a victory sign, which made some of them turn bright red. At Simple Kaffa all filter coffees are prepared using the Clever Dripper, while espresso-based drinks come out of a GB/5. Next to that, they’re well known for their exquisite matcha roll that I devoured with a few bites. Some people have dubbed it ‘Taipei’s most difficult to find coffee bar’ and I can only agree. I walked around the building twice before I found the staircase leading down to the lobby, but man, was it worth it! 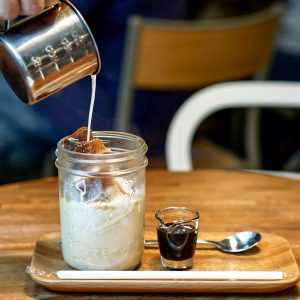 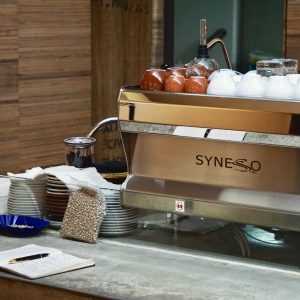 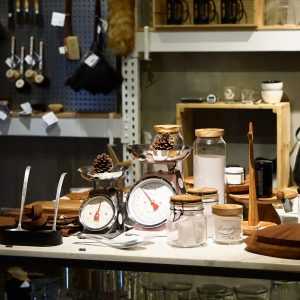 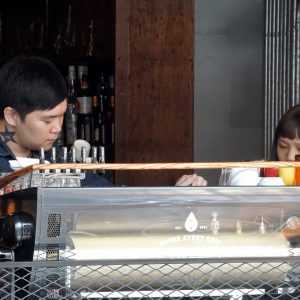