London’s markets are true tourist attractions in their own right. Already many years ago, before cities like Copenhagen, Berlin, Oslo or Rotterdam decided to jump on the ‘indoor-market-bandwagon’, London’s Borough Market drew millions of visitors every year. And for good reason. Most marketstalls are specialised in artisan products – albeit mostly rather pricey – where you can sample truffle mayonnaise, buy freshly baked bread and locally produced sausages alongside much, much more. Other markets like Covent Garden or Spitalfields focus on fashion, accessories and art with the latter recently getting a slight overhaul with the addition of a foodstall island in its middle and sattelite food stalls in each corner of the market. One of those sattelite stalls is now occupied by one of our most favourite coffee roaster in the world: Climpson & Sons. As it so happened, I was in London last week when the stall had its unofficial opening and as a result Henrik, Dan and co dragged me along to have some of its delicious coffee IPA and espresso martinis on tap. On tap goodnesss for days

At that time of day, 7pm, and given the fact that the grinder had not been installed, there was nothing else to do than to have a little drink or two and be jolly with your friends. The market itself, located on the very edge of Shoreditch and surrounded by a number of highend boutiques and chain restaurants was never high on my ‘to do list’ because frankly most of the stalls sell relatively boring items and the closest good coffee is served at Nude, but now the market is more of a destination with its excellent new food stalls and the arrival of Climpson’s only second location. The set up is, as you’d expect from them, state of the art. Espresso shots are pulled from a Mod bar while previously mentioned espresso martinis and a custom-brewed Climpson IPA are available on tap. If that’s not your thing, they also freshly brew a selection of their current filter coffees, a cup of which you can then enjoy with a small pastry or slice of cake. Yum!

While having lunch with the Climpson boys they said to me: “Honestly, we don’t know what to expect. The venue is amazing and it’s exciting to have a small stall somewhere because it’s relatively low risk, but they literally don’t have a single heat lamp anywhere. Our poor guys are going to freeze their nuts off.” Given London’s massive commuter lifestyle, the city is already speckled with mobile coffee carts and kiosk that can usually be found in and around train and tube stations, but the nice thing about this kiosk is that people who walk on by are usually browsing instead of rushing. For Climpson this is a fun experiment and for us coffee lovers it’s a welcome addition! 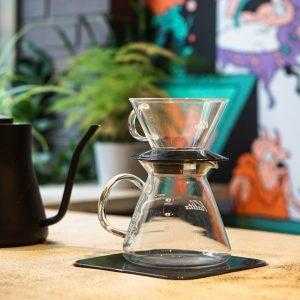